Working with Dyer and Butler and delivering for NR & Govia Thameslink Railway (GTR) the first meeting for the project took place in January 2020 despite the extension having to be completely surveyed, designed, supplied and installed by the 8th of June 2020 for the new timetable’s introduction. A great challenge for all involved to go from having absolutely no design or enabling works underway in January, only getting the first ‘boots on the ground’ in February, to an 84m extension fully fit for operation in just 4 months.

The installation and design programme was further strained by a HV route which ran through the footprint of the new extension. To allow for any chance of meeting programme this had to remain undisturbed meaning each EPS had to be fabricated so sit around the cable. Again, this route had to be surveyed before the blocks could be designed, fabricated and ultimately installed, all within four months.

The platform installation took a total of 23 working hours during a 52-hour possession beginning on the 6th of June. MPL and Dyer & Butler faced several challenges at Lancing in both design and construction but the most interesting challenge faced during this project was presented by the restrictions present through the boundary of the ASDA pedestrian walkway and car park directly to the rear of the platform. Due to this walkway having very limited drainage there was nowhere for rainwater to run off to the rear of the platform, the space restrictions imposed also prevented our standard guttering detail to the platforms rear. To overcome this a ‘hit and miss’ design was utilised at Lancing. This meant between each EPS block there was an approx. 1m space (closed off to the public with GRP trash screens) which allowed any rainwater to run off to the rear of the platform and find its way back through the platforms footprint into the track drainage.

Despite only beginning installation on the 6th of June the entire 84m platform installation at Lancing, including fencing (as well as end fence, steps and gates), GRP Trash screens and finishing trades were completed by midday on Monday 8th of June.

When this project began there was no hiding the demands that would be placed on all involved to achieve such a rapid turnover in design and construction, just four months, to meet the new timetable. To have met the delivery date despite the development of the Covid 19 pandemic in the middle of the project is even greater testament to the commitment and hard work employed by all at Network Rail, Dyer and Butler, Adams Design Associates, PBH, Crayside, GTR and MPL. 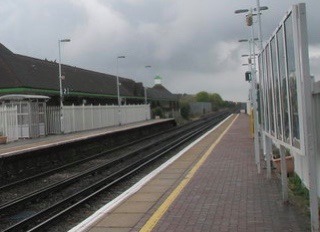